Today was a big day. A REALLY big day for my one and only son. Today he was officially accepted as a member of the 2014 Army All American Marching Band. He is one of only 125 high school seniors in the USA who were chosen for this elite group. Thousands applied and only a handful made it through the audition process. As I said, I couldn’t be prouder.

You’ve worked so hard for so many years. Congratulations, son! 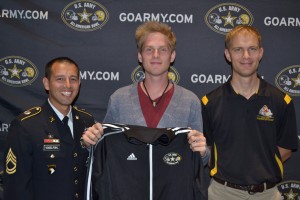 4 thoughts on “I could not be more proud”